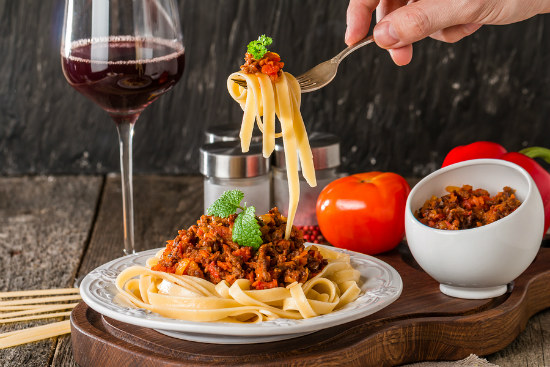 Pasta has gained a bad reputation among many dieters, who believe eating a bowl of spaghetti will make them gain weight.

However, a new Italian study, published in the Nutrition and Diabetes journal, has found pasta is not fattening.

In fact, the researchers found those who ate pasta had a lower body mass index (BMI) and a smaller waist-to-hip-ratio than those who didn’t eat it at all.

Researchers at The Institute of Research, Hospitalisation and Health Care Neuromed in Pozzilli, Italy, analysed the diets of more than 23,000 Italians.

The team used a standardised questionnaire to find out what each participant had eaten during the previous 24 hours, including time, place of consumption, detailed description of foods or beverages, quantity consumed, and brand.

Portion sizes were also taken into account and the participants were asked whether they were following a particular diet.

Not only did the study find no correlation between eating pasta and an unhealthy weight – it was the opposite, with pasta consumption being linked to being slimmer.

The study’s authors say their findings show the consumption of pasta is linked to a reduced risk of obesity.

“Pasta is often considered not adequate when you want to lose weight. And some people completely ban it from their meals. In light of this research, we can say that this is not a correct attitude,” says Licia Lacoviello, head of the Laboratory of Molecular and Nutritional Epidemiology at the Neuromed institute.

He says when eaten as part of a healthy Mediterranean diet, pasta is good for health.