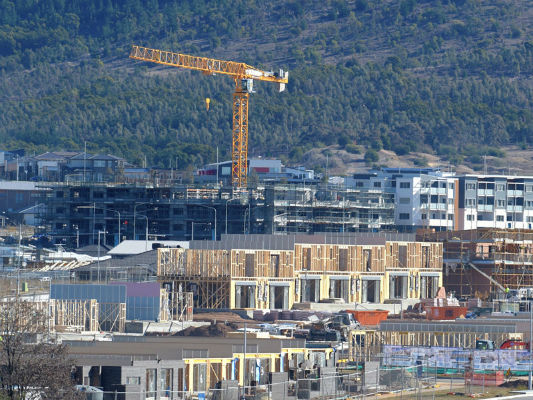 There’s a lot of attention being paid to housing construction and how it looks to have topped out but there’s not so much focus on non-residential building, which is doing just the opposite.

The seasonally adjusted figures from the Australian Bureau of Statistics can be quite volatile from month to month, thanks to large apartment projects.

Even so, the bureau’s trend estimates – which cut through the short-term ups and downs – show approvals stopped rising in May and have been easing down for the past four months.

That’s consistent with repeated warnings from economists, including those at the Reserve Bank, that an oversupply of apartments is looming and that restrictions on lending – both imposed on the banks and implemented voluntarily – are cooling demand.

It’s also consistent with the trend in housing finance: loans for the building of new homes began trending down in April, the bureau’s figures show.

But it’s not all bad news; for one thing, the level of home-building activity is still unusually high.

The trend measure for the value of approvals was $6.3 billion in September, up by $443 million from September 2015, which was in turn $650 million higher than September 2014.

Even after a four per cent fall in their seasonally adjusted value in September, residential approvals could still fall a long way before being seen as weak.

Since the beginning of last year, the trend has been running at about 4.5 per cent of gross domestic product, making this the strongest run of residential approvals since 1983, which is far back as this data series goes.

The difference between that and the current level amounts to about $1.4 billion a month.

The non-residential component of building – hotels, shops, offices, hospitals, warehouses, factories and the like – is heading higher at a rapid clip.

The latest seasonally adjusted figures probably exaggerate the surge, more than doubling between August and September with a $3.0 billion jump to $5.5 billion, with New South Wales accounting for half the rise.

But even looking at quarterly totals to smooth out the humps and bumps, the trend in non-residential approvals is still rising strongly.

A March quarter surge of 20 per cent was followed by a June quarter jump of 15 per cent.

That’s taken the level of approvals from two per cent in mid-2015 to around 2.7 per cent of GDP in the September quarter, its highest since the wave of building induced by stimulus policies during the global financial crisis.

As a result of the ongoing high level of residential approvals and the renewed strength in the non-residential category, the total value of building approvals is as high relative to the size of the economy as it’s been since the late 1980s, aside from the brief interval of GFC stimulus.

So it’s not time to sound the alarm just yet.