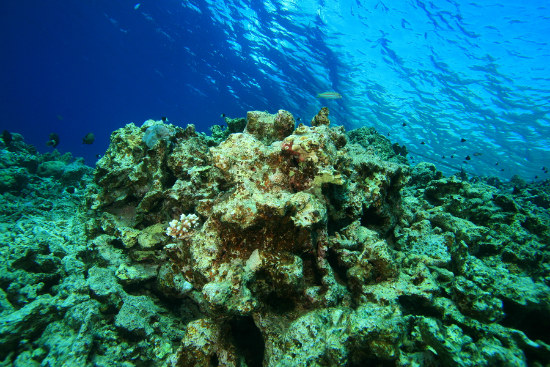 Once colourful corals surrounding a Great Barrier Reef island have turned a ghastly shade of brown, with new images showing how algae has impacted the natural wonder.

WWF Australia says the photos were taken last month at Lizard Island, the “ground zero” of a mass bleaching event that’s killed an estimated 22 per cent of the reef’s corals.

“Some people see coral bleached white and think it looks pretty. But this is what follows – it’s literally an attack of the slime,” WWF Australia spokesman Richard Leck said.

James Cook University PHD candidate Laura Richardson said many of the corals near Lizard Island were a ghastly sight when she surveyed the area in April and May.

“So many corals were already dead with turf-algae growing over the skeletons that remain,” she said.

“Just a few months ago, these reefs were characterised by live, healthy, colourful corals and fish.”

Richard Vevers, the executive director of the XL Catlin Seaview Survey which shot the photos, said the reefs normally looked stunning, although dying, at the height of bleaching.

However a few weeks after the bleaching the hard corals looked like they had been dead for years and the flesh of animals was decomposing and dripping off the reef structure, he said.

Last week the Great Barrier Reef Marine Park Authority said overall mortality of the reef was 22 per cent, with about 85 per cent of the die-off occurring on the far north between the tip of Cape York and just north of Lizard Island.

Chairman Dr Russell Reichelt said the Great Barrier Reef was still resilient with the ability to recover from major events.